Prolotherapy involves the use of medication injected into injured ligaments for the purpose of re-growing them. Since the ligaments actually re-grow with this treatment (much like a scab heals skin) the term prolotherapy, from proliferate, was coined to describe the treatment. The following Prolotherapy article is a review on the topic and was published by Dr. Robert Schwartz of Piedmont Physical Medicine & Rehabilitation, P.A. Greenville, S.C.

Proliferative therapy (prolotherapy) is the process whereby dextrose, P25G or sodium morrhuate is injected into ligaments in order to produce a proliferating response of that ligament. The purpose of these injections is to strengthen ligamentous structures and relieve pain. A review of the literature is provided and a retrospective study presented which demonstrates a 66% reduction of sacroiliac low back pain in two-thirds of the patients who received this form of treatment. 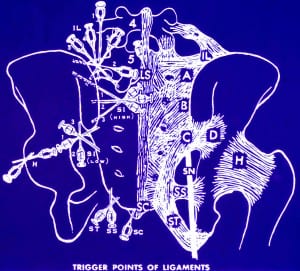 Ligaments consist of many strands of fibrous tissue that may run parallel or crisscross at various angles to each other. They provide stabilization of joints in all positions. Pain occurs when normal tension on a ligament stretches the fibers. This results in stimulation of the sensory fibers which do not stretch along with the ligament (1). In sprain or tearing, the fibers become separated from bone, and there is an accumulation of lymphy or blood at the site of injury. Healing occurs through initiation of the wound response cascade mediated by chemotactic agents and inflammatory cells. Fibrin is produced and develops into a permanent strong fibrous tissue attached to bone.

There is also a production of bone at the enthesis (1). The healing process can be interfered with. Subsequent activity can cause separation, or the repair capacity in the individual can be deficient. This results in ligament relaxation which is a weakness of the attachment. If this remains, predisposition to repeat injury, chronic pain, and altered range of motion can persist (1,2).

The healing process can be stimulated by the infiltration of a proliferative solution within the ligament. Thus, the development of firm permanent fibrous tissue with reduction of pain can take place (1-8).

The rich supply of nerve endings in articular ligaments was first described by Lerich in 1930 and later by Gardner in 1953. Hackett described most joint pain as ligament pain. He was the first to scientifically demonstrate a method of strengthening ligaments by the injection of a proliferative solution. Inflammation was produced and a permanent increase in ligament size by 35-40% resulted.

Hackett claimed a cure rate of 82% in 1600 patients with low back pain (1). At this time, proliferative therapy was known as sclerotherapy. This was because the irritants used in prolotherapy were thought to work by creation of scar tissue rather than by the development of proliferative response. Some of the irritants used in prolotherapy had been used to sclerose varicose veins as well (5).

A 1982 study by Li et al. quantified biochemically in a double-blind study the influence of injecting a proliferative solution (100ml of 5% sodium morrhuate) into rabbit medial collateral ligaments in situ. Results revealed a highly significant increase of the ligament’s mass, thickness, enthesis strength, and weight/length ratio in comparison with the saline injected controls (9).

A 1985 study, also using 5% sodium morrhuate, was conducted by Maynard et al. They did a series of five 100ul injections into intact rabbit patellar tendons and Achilles tendons. This study showed that not only is there an increase in the number of cells but also a wider variety of cell types, including fibroblast, neutrophils, lymphocytes, plasma cells, and unidentifiable cells in the injected tissues. An increase in water content and amino sugar content were also noted. Interestingly, a decrease in the mean collagen fibril diameter and hydroxyproline content were documented despite an overall increase in fibrin mass (10).

In 1987, a double – blind study was done by Ongley et al. comparing 40 patients who received spinal manipulations and ligament strengthening proliferative therapy with 41 patients who received minor manipulations and 0.9% saline injections. One injection per week was done for 6 weeks. The solution used was 2.5%phenol/25% dextrose/25% glycerin/47.5% pyrogen free water (P25G).

In a different study by R.G. Klein in 1989, histologic documentation of ligament proliferation in human subjects in response to proliferative injections was demonstrated. Biopsy specimens of posterior sacroiliac ligaments were performed pre- and post-treatment in three patients with low back pain. Each patient received a series of six weekly injections using the P25G solution into the sacroiliac ligaments. The proliferative injections resulted in collagen of objectively increased diameter and was associated with decreased pain along with an objective increase in range of motion (4).

The healing of a wound has been divided into three phases: (1) inflammatory (early and late), (2) granulation tissue formation, and (3) matrix formation and remodeling (11). Inflammation is the reaction of living tissues to all forms of injury. It involves vascular, neurologic, humoral, and cellular responses at the site of injury. Increased vascular permeability is the first mechanism. It allows the escape of plasma proteins and white cells. This is known as exudation. Neutrophils appear in perivascular spaces and they are followed by monocytes/macrophages (11).

The most important chemotactic factors for both neutrophils and macrophages include C5a (a component of the complement system), leukotriene B4 (a product of arachidonic acid metabolism), and bacterial products. Macrophages are also attracted by the basic peptides in the lysosomal granules of neutrophils and this explains why they appear as the second line of defense. These cells then destroy or neutralize, the injurious agent by phagocytosis, allowing for the repair of the damaged site to then occur (12).

Repair is the process by which lost or destroyed cells are replaced by new, living cells. The tissue defect is initially filled up with highly vascularized connective tissue called granulation tissue. It consists of newly formed small blood cells embedded in loose ground substance containing fibroblasts and inflammatory cells. Fibroblasts migrate into the wound bed under the influence of chemotactic factor (11,12).

As granulation tissue matures, inflammatory cells decrease in number, fibroblasts lay down collagen, and the capillaries become less prominent. A relatively acellular, avascular tissue with inactive spindle-shaped fibroblasts tucked in between collagen fibers emerges. The collagen fibers then aggregate into mature fibrils. The acquisition of tensile strength follows a sigmoid curve (12). The orderly movement and proliferation of cells within a healing wound is influenced by both cell signals and extracellular matrix (e.g., fibronectin and growth-stimulating factors). Thus, a wound-healing cascade is present. The growth associated with repair is regulated and ceases when healing is completed (12).

Proliferants are substances that cause a localized tissue reaction leading to an inflammatory response. The wound – healing cascade is thus triggered resulting in fibroplasia and collagen deposition. The healing cascade begins with granulocyte infiltration followed by monocyte/macrophage invasion. Growth factors are released and thus activated fibroblasts are recruited to the site to secrete new matrix. This new matrix includes collagen fibrils (2,6,7,13).

In some instances, the injected factor is altered in vivo. Phenol oxidizes to reactive quinine and sodium morrhuate as an arachidonic acid compound is a precursor to many cytokines, including leukotrienes, thromboxanes, and prostaglandins (13). Growth factors are a fourth category currently being researched at Biogenteic Laboratories (e.g., EFG, PDGF, IFG-I, FGF, TGF-beta). They directly recruit and activate local fibroblasts (13).

The effects of prolotherapy on 43 patients with chronic sacroiliac strain were retrospectively reviewed. There were no sciatic tension signs, motor weakness, sensory deficits, or patients with bone abnormalities entered into the study. The patients had all failed to respond to other forms of treatment including surgery. Ages ranged from 20 to 70 years.

Treatment consisted of three injections into the insertion of the posterior sacroiliac ligament, beginning at its most caudal one-third and moving superiorly by one-third of its length with each injection (fig. 1) The injections were done 2 weeks apart. The proliferant used was a mixture of 1 cc of 5% sodium morrhuate and 1 cc of 1% Xylocaine. A needle of proper length was used that assured the proliferant was placed on bone. The solution was distributed throughout the fibro-osseous junction.

Each patient was informed that there would be a 2- to 3- day period of discomfort in the area of the injection due to the initiation of the wound-healing cascade. Instructions were given to avoid aspirin, ibuprofen, or other prostaglandin inhibitors, and to use only acetaminophen to relieve pain. Activity was encouraged. The patients were instructed in sacroiliac mobilization exercises and fitted with a sacroiliac belt.

Each patient was seen on 2-week follow-up after the third injection. Subjective percentages of relief were recorded. If satisfactory pain relief had been obtained, they were discharged from treatment and instructed to return on an as-needed basis.

The sacroiliac joint can be considered to be unstable when the ligaments are relaxed. Because of this joint’s weight-bearing spinal mechanics the ligaments supporting it frequently become damaged. This can lead to intense pain, which may become chronic. It can result in abnormal compensatory movement as well. The altered spinal kinesiology can lead to further injury of other structures such as lumbar vertebrae, sacrum, and intervertebral disks.

Prolotherapy is designed to strengthen the sacroiliac ligaments in order to develop normal tension in them. Numbing of the ligament with Xylocaine and obtaining immediate relief provides for temporary comfort from the injection. The ensuing painful reaction that occurs from the proliferative injection represents the activity of the initiated wound-healing response. Prostaglandin inhibiting medications should be avoided.

It important to choose the proliferative solution wisely and to make sure the needle is on bone when injecting. Three cases of paralysis and two deaths have been documented after inadvertent injection of psyllium seed oil and zinc sulfate into the subarachnoid space (14-16).

Other investigators have used a phenol/dextrose/glycerin solution (P25G) and obtained significant results without complications. While the percentage of phenol in P25G is very dilute and probably safe, many clinicians prefer to use either dextrose or sodium morrhuate, as both of these agents have also been used intravenously for other medical conditions (8,17).

Although this study is a retrospective one, the data support the studies of Lui, Maynard, Ongley, and Klein. While we have not done biopsy studies to prove a proliferative effect occurred, we did obtain significant pain relief without any undue side effects (2,3,9,10).

We conclude from this study and the aforementioned literature that it is possible to induce proliferation of collagen in human ligaments using prolotherapy. The tissue that proliferates is a dense collagen and is associated with a reduction in pain. Mechanical back pain can be relieved by this method and other compensatory injuries prevented.