Patients’ Thanks is Best Medicine 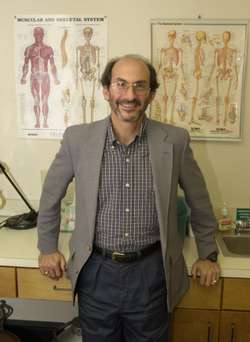 His favorite bit of literature, however, is an overcrowded scrapbook resting quietly in the corner of the office waiting room.
Filled with well over a hundred thank-you letters from patients, it provides a lift every time it catches Schwartz’s eye.

“This is really why I went into medicine,” says Schwartz, his voice softening as he points toward the book. “This makes it all worthwhile.”
The collection of notes provides recurring themes: patience and compassion. One writer thanks for “empathy and the way you care for the weak.” Another thanks for “doing battle, and helping others do battle for themselves.” Most cite time given to the patient that was well beyond the amount expected.

On the wall is an award to Schwartz as a “Hope Hero” of the RSD (Reflex Sympathetic Dystrophy) support group which meets monthly, with Schwartz often arranging the guest speakers. RSD sufferers also have access to Schwartz’s Web site (www.piedmontpmr.com), a storehouse of information about RSD, fibromyalgia, dystonia and other related conditions that keep Schwartz busy. Schwartz meets monthly with support groups of sufferers of RSD, fibromyalgia, polio & peripheral neuropathy.

For information not available on the Web site, its visitors can e-mail Schwartz directly. He gets 20 to 30 of those a week, and answers every one — from patients as well as non-patients, and sufferers from around the country.
“I love it. Sometimes I go a few days without a note, and at other times I can’t keep up,” Schwartz says of the e-mail exchange.

“Sometimes I can provide an answer that helps someone reduce pain; sometimes a patient just wants to know somebody heard them.”

Schwartz has been listening, and seeking answers most of his life. As a teen he was the primary caretaker for a mother in failing health; only 16 when she died, he’s made pain diagnosis a mission ever since.

Often, his prescriptions for pain relief swerve outside conventional routes. For example, he avoids the use of narcotics. “The question is, why is the pain here?” Schwartz asks. “Sometimes, if you prescribe opiates or narcotics, it can reduce the urgency to find the source.”

Some patients find that Schwartz is unable to unravel the mysteries. Few, however, question his effort.
“He takes a different approach to pain relief than any other doctor I’ve ever been to,” says Malinda Williamson, director of the South Carolina Fibromyalgia Support Group in Greenville. “He ran tests that no other doctor had run, and found many things not to be normal.”

Louise Plaster, director of the local RSD support group, says Schwartz “thinks outside the box, and that is what we need, because RSD is an out-of-the-box disease. “I can tell you he goes the extra mile for his patients,” says Plaster, who has been under Schwartz’s care since October 1992.

Schwartz, 47, says he began to question the symptomatic approach to pain treatment as a medical-school student and hasn’t stopped. “My passion has always been diagnosis,” he says.
After graduating from the University of Michigan (1977), and Wayne State University School of Medicine (1981), Schwartz spent three years at the University of Texas Health Science Center, where he specialized in physical medicine and rehabilitation.

Schwartz, who in the early 1980s studied such alternative treatments as acupuncture and hypnosis, sometimes varies his treatment techniques according to personality types. “There’s a mind-and-body connection to pain, and to illness,” says Schwartz.

Schwartz’s other passion is his family. The walls of his office on St. Francis Drive include 70 family photos, and 24 elementary-school art works “by the boys” — P.J. and Austin, now 19 and 16.

The medical practice is a family project. Schwartz’s Web site was designed by Austin, a Greenville Tech Charter School sophomore who continues to serve as webmaster. P.J., a sophomore at the College of Charleston, was content editor for part of the Web site.

Schwartz calls wife Sheri, the office wellness coordinator and a Pilates teacher, “his right hand.” The couple met on a blind date — arranged by Sheri’s father — during Schwartz’s third year of medical school.

“I consider myself wealthy, because of my family,” Schwartz says. “They pick me up.”
That enables him to continue doing the same for others.