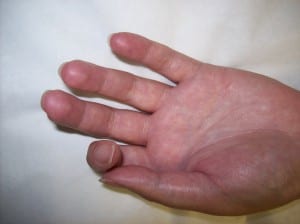 If you’ve ever injured your arm or leg, you’ll be familiar with the sharp, often agonizing pain of the initial damage, which then becomes more of a burning sensation. The two kinds of pain originate from separate parts of your nervous system; the sharp pain from the fast pain fibers, and then the burning pain from the sympathetic nerve fibers. As the initial pain starts to ease and healing begins, the injury will be tender and feel bruised, but the initial sharp and burning pain should subside. If the burning sensation carries on, however, it could be due to Reflex Sympathetic Dystrophy (RSD), which is also known as Complex Regional Pain Syndrome (CRPS).

Sympathetic nerve fibers react to injuries by reducing blood flow to the damaged area so you don’t risk losing too much blood if you’re wounded. As the initial trauma subsides, the sympathetic nerve fibers should allow the normal flow of blood to restart, helping the injury to heal; but with Reflex Sympathetic Dystrophy (RSD/CRPS) this doesn’t happen. You’re likely to find you’ve become sensitive to temperature and changes in the weather, and feel like the injured area is always colder than the rest of your body.

For many patients, the pain of RSD/CRPS is worse than the initial injury. Left untreated, the symptoms can worsen, and you may start to find the pain levels increasing again, that the area begins swelling, and that your skin is discolored and sweaty. You could also find that you don’t like anything touching the affected area as it becomes increasingly sensitive.

RSD/CRPS most often causes a decrease in blood flow to the injured tissues, which persists long past when the damage should have healed. Without any interventions, the symptoms continue to worsen and may even start to affect your movements. Muscles can deteriorate, and some patients’ bones start thinning as well. Reflex Sympathetic Dystrophy/Complex Regional Pain Syndrome usually manifests after an injury, when instead of the sympathetic nerve response decreasing as the healing process begins, it stays on high alert and continues to generate pain signals.

Accurate diagnosis may be hard to find because it takes in-depth knowledge to recognize the condition and test for RSD/CRPS. General practitioners aren’t usually familiar with RSD/CRPS, and may not be fully aware of the specialized testing procedures used to make a positive diagnosis. Consulting specialists in pain like the team at Piedmont Physical Medicine and Rehabilitation will ensure you receive diagnostic testing and care from doctors who have extensive experience in helping patients with this condition.

Experienced pain specialists may use bone scans or cold stress sympathetic skin response  medical thermography to prove the presence and determine the distribution of  RSD/CRPS. Thermography is a highly sensitive tool for measuring skin temperature and gives a visual representation of the temperature on the surface of the skin. The key sign of RSD/CRPS is an imbalance in temperature between matching limbs; for example, if one leg were significantly colder than the other, this would be a good indication that there was a problem with sympathetic nerve function in that area.

There’s no cure as such for RSD/CRPS, but there are effective treatment options available, including medications, regenerative medicine techniques, anesthetic blocks, injection therapy, and physical therapy. The sooner you can get a diagnosis the better because treatments are far more effective when they’re used as early as possible after the onset of the condition.

While certain medications increase blood flow and can actually be healing, pain medications just mask symptoms (and usually not very effectively), so if the cause of the problem can be determined through proper testing, then it may be possible to treat the condition and bring about a more permanent solution to the problem. For instance, if you have RSD/CRPS in your wrist after a bone fracture, it is a good idea to consider if the pain is persisting because one of the ligaments hasn’t healed correctly. If that’s the case, treating the ligament and helping it to heal more fully should help ease the RSD/CRPS symptoms. The expert team at PPMR provides the best possible care and most effective treatments for people affected by Reflex Sympathetic Dystrophy (RSD/CRPS), so call them today to book an appointment.