What is Fibromyalgia and 9 Symptoms to Watch Out For 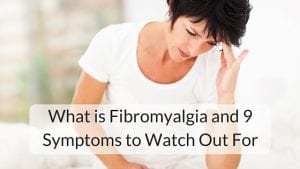 Fibromyalgia is a debilitating disorder that causes muscle pain and fatigue. Those who suffer from fibromyalgia can have mild to tense pain throughout their body – which can affect their muscles, joints and/or skin. The pain and sensitivity are not always centralized – it can affect different parts of the body at different times or all at once.

It affects 5 million Americans that are 18 or older, and more common in women than men (80-90% diagnosed are women). However, this does not mean that fibromyalgia doesn’t affect children or adolescents, despite most people being in their middle-ages when they are diagnosed.

The causes of fibromyalgia are not scientifically known, but there are a number of factors that are linked to the condition. These include:

Fibromyalgia can also occur on its own, so it may be difficult to pinpoint the root cause in all cases.

Those who suffer from fibromyalgia don’t initially know what it is they’re suffering from, and it can be a confusing time for many. The symptoms can be mild and sporadic; one day your hands might be in pain, another day your jaw, and the following week your whole body might be oversensitive. This often misleads the person affected into thinking they are all separate issues, when it is actually not. And this confusion, as well as fibromyalgia being an uncommon discourse in mainstream disorders, is why the condition comes as a shock to many who are diagnosed.

The symptoms of fibromyalgia are vast. The disorder might appear through one or two symptoms at first, seeming like nothing worrisome at all, but the progression isn’t always far behind.

So how do you stay aware? By being mindful of these 9 early symptoms of fibromyalgia…

This is the most common sign of fibromyalgia in its early stages. The pain or sensitivity may be dull or mild, or it can be very intense and sharp. Pain is usually not centralized, and can affect multiple parts of the body at different times or all at once. The pain and sensitivity may also be intensified by changes in temperature, stress or activity and movement.

On top of pain, fibromyalgia can cause tender areas or points around the body. This is usually distinguishable if you apply light pressure on the area and it causes pain. Some common places for oversensitive tender points are:

Identifying tender points is a crucial step in diagnosing fibromyalgia.

Because of the pain and sensitivity caused by fibromyalgia, sleeping at night can be quite difficult. The lack of sleep often causes fatigue, but even the condition itself can make you feel overwhelmingly exhausted. When your body’s in pain, it takes a toll on your energy level. This, in turn may interfere with one’s occupational, personal or social life.

Restless leg syndrome occurs when an uncomfortable sensation crawls down your legs. The sensation urges you to move or twitch your legs. This can occur when you sleep, causing restlessness and ultimately fatigue as well.

Fibromyalgia can also cause cognitive issues – such as remembering and concentrating. Being confused, mixing up words when speaking or easily forgetting something are all symptoms to watch out for. There is no definite research as to why this happens, but it may be an effect of sleep deprivation or fibromyalgia pain to the brain.

Approximately half of those diagnosed with fibromyalgia develop headaches as well. This can form into more intense migraines that might lead to nausea, vomiting and visions of flashing light. The reason for this isn’t clear yet, but it appears to occur due to a chemical imbalance in the brain.

Irritable bowel syndrome is a condition that causes pain and bloating in your stomach, which can lead to constipation and diarrhea.

For women, fibromyalgia has the potential to increase pain and cramping during menstrual periods. Women might also find that sexual intercourse can become painful as well. Women with fibromyalgia also report having painful endometriosis, which is a condition that causes tissue from the uterus to grow in other parts of the pelvis.

Because of all these symptoms, the toll of fibromyalgia can have a significant effect on overall health and happiness. The pain can be quite debilitating and discouraging, making it difficult for some to even get out of bed and start the day. It’s a vicious cycle of pain, fatigue and stress that has the capability to mentally tear someone down.

Reading through these symptoms, it’s not difficult to understand why fibromyalgia has such a negative impact on those suffering. But this is why it is so important to be aware of what your body is going through and where to go for help. It’s easy to give out medication and call it a day, but sometimes more needs to be done for fibromyalgia pain.

If you feel that you are experiencing the previous mentioned symptoms, or know someone who is, do not hesitate to reach out and contact our office in Greenville for help. We perform thorough examinations to understand your condition so that we can provide solutions to help.