Fatigue may result from several factors including, but not limited to chronic disease, poor nutrition (or gastric absorption), environmental toxicity and lack of restful sleep. Often chronic fatigue can be improved upon by reducing total load (the total number of things that do not allow you to get well). Improving “methylation” has recently proposed as a central theme as well. 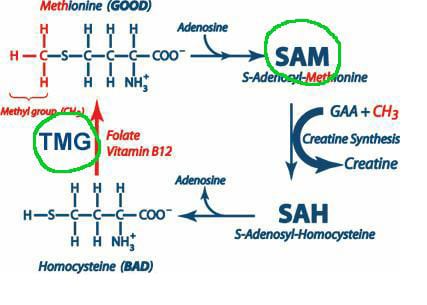 Methylation is the process of adding a “methyl” group (CH3) to organic molecules such a hormones, homocystiene and creatine. While supplements such as DHEA, SAMe, TMG, Phospholipids, Amino acids, Folate and B12 are available to help the lay person achieve this end, results are often disappointing. This is at least in part due to the hap-hazard nature of over the counter supplementation. For example, over half of all methylation occurs in the liver to help make creatine (which is needed for strong muscles). So if creatine is low, then adding the other supplements listed above is of no value. It is not really possible to know which, if any of these products are needed without formal blood testing. On the bright side, with formal blood testing addressing methylation deficiencies can be quite helpful. Naturally, getting a good night’s sleep can help alleviate the symptoms of many medical conditions as well.

Example conditions include chronic fatigue, chronic pain, headache, snoring, sleep apnea, and restless leg syndrome. Although many realize that they awaken tired, and have tried sleep remedies, restful sleep remains elusive. As endurance declines, the first stages of chronic fatigue sets in. While other medical conditions such as heart failure, malnutrition or infection must be considered, correcting sleep disorders can be an important wellness step.

Over time you become more run down than you realize. Daytime sleepiness (such as falling asleep at work, while driving or when talking), irritability, or fatigue can set in. Morning headaches, forgetfulness, mood changes and a decreased interest in sex can occur as well. More severe cases involve sleep apnea.

With sleep apnea, people stop breathing for 10 to 30 seconds at a time when asleep. During these episodes, they may wake up, even though they are unaware of it. Nine out of 10 people with sleep apnea have obstructive apnea. With obstructive apnea, something is blocking the passage or windpipe (called the trachea) that brings air into the lungs.

It is not uncommon for the blockage to be due to a relaxed tongue, enlarged tonsils or drooping uvula (the little piece of flesh that hangs down in the back of the throat). At first, sleep disorders are not harmful. However, if left untreated, there is increased risk of heart disease and stroke. Chronic fatigue, pain, fibromyalgia and headache are more likely to become problematic as well.

In some instances, formal sleep studies are performed, and if sleep apnea is present, CPAP (continuous positive airway pressure) may be prescribed. Unfortunately, since this involves wearing either an oxygen mask or nasal cannula while in bed, many find it too uncomfortable to be of benefit. Alternatively, certain medications to improve daytime wakefulness, such as Provigil, can be helpful.

Fortunately, a simple alternative is available. It involves a series of tongue strengthening exercises as described in the “I Just Want To Sleep” program by Janet M. Bennett, M.Ed., CCC-SLP. One exercise is to place the tip of the tongue on the roof of the mouth, just behind the upper teeth, and hold it in place for five minutes. The results can be dramatic.

Patients who do the following — snore, choke, grasp, or hold their breath during sleep, wake up with headaches, grind their teeth, require frequent trips to the bathroom during the night, wake up non-refreshed, sweating or with a dry mouth, suffer from nighttime cough, restless legs syndrome or attention deficit disorder — should tell their doctor that they are concerned they may have a sleep disorder. The solution can be simpler than you might think!