Dysautonomia broadly refers to a problem with the autonomic nervous system, or ANS. The ANS is a special portion of the nervous system which is integral in the body’s maintenance of homeostasis, or “steady state”.  The ANS controls functions of the body that occur automatically.  These functions are typically outside the domain of the peripheral and central nervous system.  For example, heart rate, respiratory rate, bowel motility, bladder contractility, pupil size, skin temperature and sweating are all modulated by the ANS.

Of equal importance is the ANS role in governing interactions between the brain and brainstem.  The classic example is the fight or flight response.  If the ANS is overactive, or if the brainstem perceives too many inputs or threats, then pupil narrowing, increased respiratory rate, and sphincter activation of the bowel and bladder occur.  It is also critically important in managing how our blood vessels respond to the surrounding environment.  For instance, in cold weather the autonomic nervous system can tighten, or narrow, the small blood vessels to the skin in an effort to conserve warmth in essential internal organs.

All of these represent normal responses.   What is not normal is if the responses are excessive, last too long, or occur without good reason.  The nervous system is firing too quickly, too much, or lacks proper control.  This is the basis for dysautonomia and it can take a variety of forms.   Dysautonomia can be local, as in Reflex Sympathetic Dystrophy (RSD)/Complex Regional Pain Syndrome (CRPS). It can be generalized, as in pure autonomic failure.  It can be acute and reversible, as in Guillain-Barre syndrome. Or it can be or chronic and progressive as in diabetes and alcoholism. 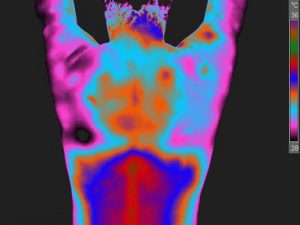 Most frequently dysautonomia presents as forme fruste, or incomplete expression.  Common entities such as Fibromyalgia, Myofascial Pain, Weather Sensitive Pain, Thoracic Outlet Syndrome (TOS), Barre-Lieou, Fight or Flight (FOF) associated anxiety, Attention Deficit Disorders, and Peripheral & Central Sensitization all have autonomic components.   Moreover, dysautonomia presenting on its own or in conjunction with underlying circulatory problems can create poor perfusion of the extremities, lending itself to temperature differences in the hands and feet.  But such symptoms can occur in the neck, back, ligaments and joints as well.

Dysautonomia can also occur as a primary condition or in association with multiple degenerative neurological diseases such as Parkinson’s disease, Multi System Atrophy, Progressive Supranuclear Palsy, and Familial Dysautonomia.  Another classic example of dysautonomia is POTS, or Postural Orthostatic Tachycardia Syndrome where patients complain of dizziness, rapid heart rate, and sometimes fainting when changing body positions.

In men, generalized dysautonomia can be marked by orthostatic hypotension and impotence. Dysautonomia is also often associated with hypermobility, being both local and generalized (think weather sensitive tender points with comorbid cardiac arrythmia).

A thorough history and physical examination are necessary to identify potential dysautonomia.  A history of weather sensitivity, non-responsive pain, the presence of associated conditions and symptoms such as increased heart rate, blurred vision, increased skin sensitivity, and changes in skin coloration will heighten the provider’s index of suspicion.   In addition, diagnostic modalities such as cold stress Sympathetic Skin Response vasomotor mapping (SSR), tilt table testing, and vertebral artery vasoreactive testing are useful in validating the patient’s symptoms as well as the presence of autonomic dysfunction.   Most importantly,  these diagnostic insights allow the physician to gain insight into the underlying problem and allow him to address the problem in the most effective manner possible.