It is not uncommon for new Greenville, Spartanburg and Anderson area patients to visit us with abdominal, flank, chest, or groin pain that remains undiagnosed. It is particularly frustrating when their previous doctors failed reveal a source. To the afflicted, self-doubt and then depression may set in.

For many, examination of the somatic system (muscles, nerves and ligaments) can hold the answer. Most of us understand that one sign of a heart attack is referral of pain into the chest wall and left arm. There is not as much awareness that musculoskeletal problems including Neck Pain, Thoracic Outlet Syndrome, and Myofascial Syndrome can cause similar complaints, including an initial impression that the heart is the source, when in fact it is not. Similar examples exist for abdominal, pelvic, flank, and groin pain.

One of the most common explanations for this phenomenon points to pain and sensory nerves, which allow “cross talk” between the two systems (figure 1). In fact, somato-visceral reflex arcs have been studied rather extensively, and most of the associated referral patterns have been described (figure 2). 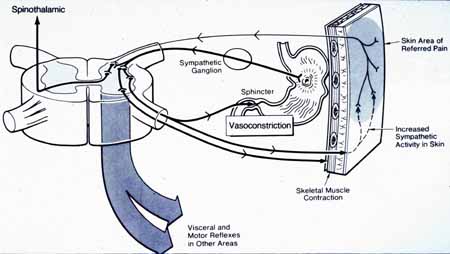 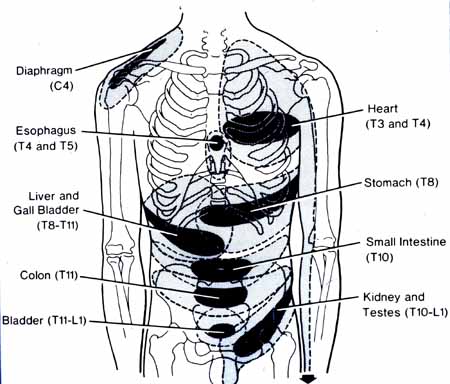 In addition to the pain and sensory nerves, there are several other ways these two systems may cross talk. The Autonomic portion of the nervous system (figure 3) is responsible for controlling functions that occur without thought, or automatically, for both systems. For example, when frightened your heart rate goes up, the eyes dilate, and your muscles go tense all at once. Mechanical problems (movement induced abnormalities), hormonal mechanisms and the vascular system are other sources that permit cross-talk. 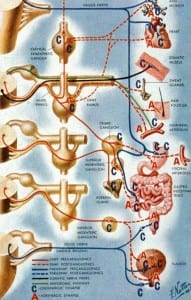 In order to properly diagnose these conditions, a doctor’s visit is required. Typically, either a primary care physician or an internal organ specialist will want to make sure that a visceral source — the stomach, colon, ovaries, uterus, kidney, and genitals — are evaluated before considering the somatic system. A doctor who is an expert in musculoskeletal and somato-visceral pain should be able to help make the distinction.

It is also quite possible that a “mixed” picture exists, where both the somatic and visceral systems are involved. In this instance, treatment of both segments will be required in order to achieve symptomatic relief.

Evaluating somato-visceral pain is complex. There can be other factors such as medication, chemicals, poisons, heavy metals, and toxins that may also contribute to the problem. If you believe that you have a musculoskeletal component to your pain, and an internal organ workup has not been satisfying, then discuss the possibility with your doctor.