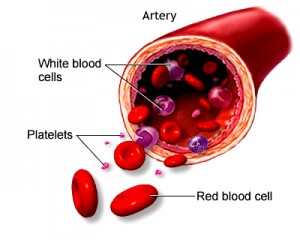 Calcium (Ca)
Erythrocyte calcium is associated with the etiology of heart disease and stroke, as evidenced by correlation with erythrocyte morphological changes in ischemic vascular disease. Intracellular calcium content plays an important role in the induction of blood pressure elevation. Total erythrocyte calcium is elevated in hypertension and in postnatal hypoxic-ishemic encephalopathy. Calcium levels in erythrocytes are not an accurate measure of calcium nutritional status because there are strong mechanisms maintaining the critical intracellular calcium concentrations independent of the total body calcium regulation exerted by parathyroid hormone, vitamin D, etc.

Chromium (Cr)
Chromium accumulates primarily in spleen and heart tissue. Dietary sources include liver, brewer’s yeast, black pepper, and whole grains. The greatest number of chromium studies involve its role in glucose metabolism. Diabetic patients showed lower hair chromium. Sugar metabolism was improved in over 80 percent of individuals who have a slight glucose intolerance by using 200 mg/d chromium supplement. Chromium used in this way works as a nutrient, not as a drug, affecting only those who are deficient in chromium. The impact of this element on sugar metabolism is through its role in uptake of insulin, and losses of chromium in urine are related to increased mobilization in response to the stimulus of frequent blood sugar peaks. Chromium also aids in lowering LDL cholesterol and raising HDL cholesterol.

Copper (Cu)
Most copper is concentrated in liver, brain and hair but is present in all other tissues. Best dietary sources are whole grains, nuts, seeds, beans, liver and shellfish. Most of the copper present in erythrocytes is bound to the enzyme superoxide dismutase (SOD), which protects the cells from oxidative damage.

Dietary deficiency of copper is seen as lowered red cell copper and SOD, even in early stages of copper depletion. Impairment of function due to copper deficiency may result from reduced activities of the enzymes ceruloplasmin, monoamine oxidase, and lysyl oxidase in connective tissue and SOD. Loss of these biochemical functions can lead to anemia, neural control, lung and bone disturbances, CVD, and accelerated aging.

In copper deficiencies, supplementation with 3-5 mg/d as copper asparate is helpful. Chronically elevated plasma copper may result in elevation of erythrocyte coppers as well, although the two partitions utilize copper differently. About 80 percent of erythrocyte copper is associated with the enzyme superoxide dismutase while most plasma copper is bound to ceruloplasmin. Patients with Wilson’s disease, an inherited copper accumulating disease, show elevated erythrocyte copper, which is resistant to copper-lowering treatments. In these cases copper accumulates in the liver and brain where it causes tissue degeneration, apparently due to the stimulation of protein and DNA oxidative damage.

Magnesium (Mg)
Magnesium serves as a cofactor in approximately three hundred enzyme systems, making this element a critically important nutrient for many bodily functions. Deficiency conditions can cause a wide variety of problems including hypertension, diabetes, and PMS. Magnesium plays a vital role in normal cardiac function, and magnesium deficiency has been increasingly associated with cardiovascular disease. Some suggest hypomagnesemia is in itself atherogenic and low magnesium levels in drinking water have been associated with increased risk to myocardial infarction. Magnesium has also been found useful in the treatment of congestive heart failure, tachycardias and other arrthymias .

Magnesium deficiency in humans is rarely severe, although symptoms of marginal deficiency may be many and varied. Frequently associated deficiency signs in humans are neuromuscular (tremors, fasciculations, and gross muscle spasms).

The magnesium content of red blood cells is a good indicator of short term magnesium status, and low levels indicate nutritional deficiency. Because of the requirement for magnesium by many enzymes of energy transfer, magnesium deficiency affects all tissues. The largest energy user, nervous tissue, shows the earliest signs with the appearance of dullness and listlessness, nausea and loss of appetite, alpecia (rapid hair loss) tremors, and convulsions.

The major dietary sources of magnesium are nuts, beans and dark green vegetables.

Manganese (Mn)
Manganese is found in nuts, whole grains and leafy green vegetables. Manganese, like magnesium and zinc, is associated with a large number of enzymes in many areas of metabolism, especially those involved in connective tissue maintenance, fatty acid synthesis, and Krebs cycle pathways (where carbon dioxide and water are oxidized). Manganese deficiency contributes to glucose intolerance. Its absorption in the intestine is impaired by calcium, phosphate and iron. Toxicity appears quite low.

Molybdenum (Mo)
Molybdenum is present in the body in extremely small amounts and is difficult to measure. The enzyme xanthine oxidase in the pathway that converts purines into uric acid requires molybdenum. Molybdenum is absorbed fairly well from the diet. It is abundant in whole grains and legumes.

Potassium (K)
The erythrocyte potassium level is the best single measure of body potassium status. Mild to moderate potassium inadequacy is frequently found in those whose diet is low in fresh vegetables and fruit, especially if meat and fish intake is also low. Fortunately, the body has strong conservation mechanisms that dampen the effects of periods of low intake. Nervous and muscles tissues have strong requirements for potassium to maintain excitability. Depletion of body potassium can lead to a wide range of effects, including hypertension, heart arrhythmias, and muscle weakness. The use of vegetable juices, citrus juices, bananas, melons, and other fruits and vegetables may need to be increased.

Selenium (Se)
Selenium has a fairly narrow window of safe effectiveness and works closely with vitamin E. Protein-containing foods such as meats and seafood are good sources of selenium, where the selenium is bound to amino acids. Evidence shows that dietary intake of selenium is directly related to levels of selenium in erythrocytes; low levels indicate depleted selenium pools. Selenium functions primarily as an activator of enzymes necessary for cellular protection from oxidative damage and maintenance of normal redox potentials. A primary role of selenium in erythrocytes appears to be the activation of the enzyme glutathione peroxidase whereby glutathione (the critical tripeptide antioxidant/antitoxin for all cells) reacts with oxygen radicals. As importantly, selenium catalyzes glutathione reductase, an enzyme that keeps glutathione in its reduced or active form.

Vanadium (V)
Recent data show vanadium to be essential for humans. Food concentrations vary greatly. Diets high in unsaturated oils have more vanadium than those high in saturates. Unrefined brown sugar has 1000 times more vanadium than white sugar. Food is generally low in vanadium. Absorption of vanadium is highly dependent on its form. It is retained by liver and bone and transported on transferring.

Vanadium lowers cholesterol synthesis and may lower plasma triglycerides in humans. It promotes mineralization of bones and teeth and may protect against caries.

Vanadium levels can become high due to environmental exposure to chemicals containing this element, as it is absorbed through inhalation. The significance of values below the reference range for vanadium is not well established.

Zinc (Zn)
Sources of zinc in the diet include whole grains, nuts, seeds and seafoods, especially shellfish. Growth and repair of any tissue is dependent on zinc as an activation cofactor for DNA/RNA polymerase; for this reason zinc is vital to normal healing of wounds and skin disorders. Dermatoses related to low zinc status are well known; acrodermatitis enteropathiea is a severe deficiency seen in infants, and a milder form is seen in adults.

Zinc is required for normal immune function. In fact, there are many similarities between the immunologic parameters of zinc deficiency and those of AIDS. Low zinc is associated with low T helper lymphocytes. If dietary intake of calcium, copper or iron is excessive (usually supplemental), tissue zinc may become depleted.

If zinc is elevated, problems that might occur include iron non-responsive anemia due to relative copper deficiency, increased vascular disease risk from lowered HDL cholesterol, and reduced antioxidant protection activity because this enzyme’s selenium cofactor is antagonized by high zinc.