Stem Cell Research Throughout the Years 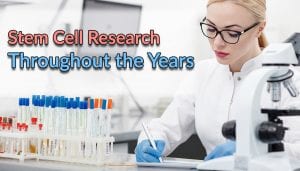 Although we love educating our patients on the latest stem cell news, sometimes it’s interesting to look back at the history of science to see where it all stemmed from! Have you ever been curious about stem cell research and how it has developed over the years? If so, keep reading on…

Scientists from all over the world have been fascinated by the idea of stem cells ever since the 19th century. No rock was left unturned as they sought to study plants, animals, and people to have a better understanding of biological life. In the late 1800s, with advancing microscope technology, cell propagation and differentiation were witnessed for the first time. This meant that cells were being recognized as building blocks of life, and that there was a lot more to understand about human biological development.

In the early 20th century European researchers realized that the cells that make up our body are derived from a particular “stem cell.” However, it wasn’t until later on in the century that stem cell research took flight.

Care to know more about the history of stem cell research?

Here’s a quick overview of stem cell research from the recent past:

1957: Dr. E Donnall Thomas performs the first successful bone marrow transplant between a related donor and recipient is performed in New York. The patient had leukemia and was given radiotherapy before being treated with healthy bone marrow from an identical twin.

1963: Dr. James Till and Dr. Ernest McCulloch discover transplantable stem cells at the Ontario Cancer Institute in Toronto – this is when stem cell research took off.

1973: This was when the first bone marrow transplant between unrelated patients was done. A five-year-old patient in New York with severe combined immunodeficiency (SCID) was treated with multiple infusions of bone marrow from a donor in Denmark.

1981: Martin Evans and his team from the University of Cambridge (at the time) was the first to identify embryonic stem cells in mice.

1995: Scientists at the University of Wisconsin derive the first embryonic stem cells from non-human primates.

1998: Scientists at the University of Wisconsin, led by James Thompson and at Johns Hopkins University, led by John Gearhart, isolate and grew the first stem cells from human embryos.

1999: Researchers discover new methods that stem cells can be made to differentiate into different cell types (change into other specialized functioning cells).

2010: A person with spinal injury becomes the first to receive a medical treatment derived from human embryonic stem cells as part of a trial study.

Naturally there are other examples of important milestones. Stem cell research into different applications is now exploding. Huge discoveries were made in the last 60 years and astronomical scientific advances have pushed this field farther than imagined. Many people were helped along the way, but there is still more to be learned about stem cells. Today, in the clinical setting, treating pain and degenerative diseases have shown to be successful, but there is a lot of room to grow and understand if and how stem cells can help on other ways too.

At Piedmont Physical Medicine and Rehabilitation, PA, our team in Greenville is always eager to learn more about the regenerative field. Were always keeping on top of the latest scientific news and discoveries. After all, the more we know, the better we can help you!