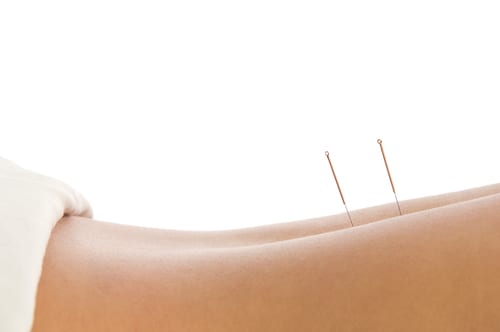 The acupuncture services we offer in the Greenville, Spartanburg & Anderson areas can offer relief for acute and chronic pain.

Acupuncture originated in China more than 2,000 years ago, making it one of the oldest and most commonly used medical procedures in the world. The term acupuncture describes a family of procedures involving stimulation of anatomical points on the body by a variety of techniques.

In the past two decades, acupuncture has grown in popularity in the United States. The report from a Consensus Development Conference on Acupuncture held at the National Institutes of Health (NIH) in 1997 stated that acupuncture is being “widely” practiced–by thousands of physicians, dentists, acupuncturists, and other practitioners–for relief or prevention of pain and for various other health conditions.

The acupuncture technique that has been most studied scientifically involves penetrating the skin with thin, solid, metallic needles that are manipulated by the hands or by electrical stimulation. Acupuncture needles are metallic, solid, and hair-thin. People experience acupuncture differently, but most feel no or minimal pain as the needles are inserted. Some people are energized by treatment, while others feel relaxed.

Studies have documented acupuncture’s effects, but they have not been able to fully explain how acupuncture works within the framework of the Western system of medicine that is commonly practiced in the United States. It is proposed that acupuncture produces its effects through regulating the nervous system, thus aiding the activity of pain-killing biochemicals such as endorphins and immune system cells at specific sites in the body.

In addition, studies have shown that acupuncture may alter brain chemistry by changing the release of neurotransmitters and neurohormones, thus affecting the parts of the central nervous system related to sensation and involuntary body functions, such as immune reactions and processes that regulate a person’s blood pressure, blood flow, and body temperature.

While acupuncture still has limited insurance coverage, it does offer a viable alternative for treatment, especially in those afflicted with acute or chronic muscular pains and certain addictions such as smoking.